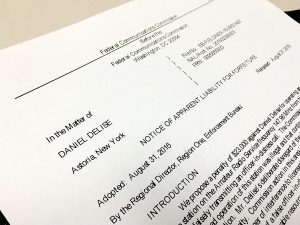 BEARS President Howard Price/KA2QPJ celebrated the Notice of Apparent Liability issued against Delise by the FCC,  saying “our long regional nightmare is over.”

The NAL caps an investigation going back to at least 2012, which produced a Warning of Unlicensed Operation against Delise. The Commission continued to receive complaints about Mr. Delise throughout 2013 and 2014. FCC agents had difficulty tracing some of the malicious activity back to Delise, because many of his transmissions were too short to track, and were made on a number of different frequencies.

In April of this year, FCC agents caught a break. According to the FCC NAL [local copy]: “Two field agents started to monitor the area in Astoria, NY, where Daniel Delise had been reported to reside. The agents detected strong voice transmissions on the amateur radio frequency 147.96 MHz. The agents used direction finding techniques to determine that the voice transmissions were originating from the antennas on the roof where Mr. Delise had been reported to reside. After determining the direction from which the radio transmissions were coming and one of the agents believing that he recognized Daniel Delise’s voice in the transmissions, the field agents approached his apartment. Mr. Delise’s father, Samuel Delise, gave the agents permission to enter the apartment. Once the agents were inside, Daniel Delise then permitted the agents to inspect his radio transmitting equipment. The agents were able to confirm that the voice they heard on 147.96 MHz was that of Daniel Delise.” These findings resulted in a Notice of Unlicensed Operation being issued against Delise.

Later that same month, according to the FCC, “the New York City Police Department (NYPD) informed a Commission field agent that the NYPD had taken Daniel Delise into custody [local copy] for “sending out false radio transmissions over the New York City Police Department’s radio transmission system” and for possessing radios that operate on NYPD frequencies without permission in violation of New York law. The NYPD report said that a call went out over the police radio for an officer in need. When an NYPD officer responded to the call, he saw Daniel Delise speaking into a radio device. The report said that Mr. Delise admitted to making the transmissions, and that he said he had more radios and would continue to transmit on police frequencies. The NYPD obtained a warrant for Mr. Delise’s apartment and confiscated all the radio transmitting equipment from Mr. Delise (except the antennas), including fourteen radios that transmit and receive NYPD communications.”

This week, the FCC issued a Notice of Apparent Liability against Delise, assessing fines of $23,000, citing violations of Sections 301 and 325 of the Communications Act. Delise has 30 days from the date of the NAL to either pay the full amount of the fine, request an extended payment period or file documents in support of a request to reduce or cancel the fine. Delise could have faced total fines in excess of $140,000.

BEARS thanks the ARRL and our own Hudson Division leadership for their help in bringing this action, and to our fellow hams and repeater operators for the time and effort they devoted to logging the complaints that resulted in this enforcement action. While this NAL sends a strong message to other would-be violators, this is not likely to be the last time jammers and pirates seek to cause havoc on our bands. BEARS urges all its members to remain vigilant, and to report violations to the FCC and the ARRL Hudson Division in a complete and timely manner.

BEARS President
View all posts by Howard Price →
This entry was posted in Amateur Radio News, Uncategorized. Bookmark the permalink.